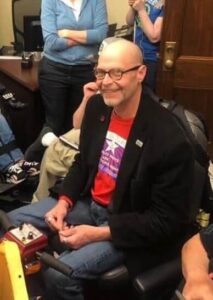 Mike has been an active member and organizer in the disability rights movement for 35 years. For the past 25 years, he was the Executive Director of the Topeka Independent Living Resource Center. He currently still serves as Consulting Director. Mike served as National Council on Independent Living (NCIL) President from 2001-2005. He is co-founder of the Kansas ADAPT Chapter, and a national ADAPT organizer. Mike was appointed to the Statewide Independent Living Council of Kansas from 2003-2006. Mike also served on the Board of the Disability Rights Center of Kansas and as a national member of the Board of the Atlantis Community in Denver, CO. Mike is involved in national efforts to promote choice, independence, and freedom for people with disabilities through his work with the Community Living Policy Center of Brandeis University and the Disability and Aging Collaborative currently hosted by the ARC. Mike has also assisted with drafting language for national personal supports legislation such as Community First Choice Option that passed as part of the Affordable Care Act and the CLASS Act that was ultimately repealed. Most recently he has been engaged in the effort to pass a permanent reauthorization of the Money Follows the Person program and has assisted with drafting language for a possible Medicaid Infrastructure Act. Mike also assisted with drafting federal legislation, the Disability Integration Act, that would create a civil right to home and community services and supports as an alternative to institutional placement. In addition to involvement with research and training through the Community Living Policy Center, Mike’s efforts have included projects such as the University of Montana Nursing Home Emancipation grant and involvement with the development of an on-line training curriculum for direct service workers. Mike has recently provided workshops at the National Council on Independent Living’s annual conference, as well as that of the Association of Rural Centers for Independent Living. Mike was asked to join the Centene National Advisory Council tasked with providing input about disability philosophy, perspectives, and issues for the corporation. Mike has presented all around the country, offering technical assistance for people with disabilities who are organizing, state and federal agencies and programs that are seeking to support people with disabilities in the community, and community partners who are finding new ways to promote choice, independence, and freedom for all people.

Mike has been recognized many times at the national and state levels as a leader and thinker, including as the first recipient of the Max Starkloff Lifetime Achievement Award presented at the 2018 NCIL conference. Mike was similarly recognized by the Kansas Disability Caucus. Mike’s current past-times include playing guitar, reading, storytelling, and training miniature donkeys as rural service animals.