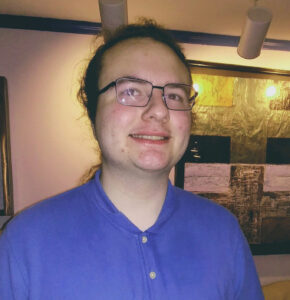 Liam is originally from outside of Hartford, Connecticut where he grew up in the Disability Rights movement and learned about the importance of civil rights and activism. He has experience in political campaigns on the congressional, gubernatorial and presidential level. He has experience volunteering for Habitat for Humanity ReStore and interning for Living Tongues Institute for Endangered Languages. He graduated from St. John’s College in Annapolis, Maryland in 2021 where he majored in liberal arts and studied western philosophy, literature, music, mathematics, science, French and Ancient Greek. Liam has studied Spanish for seven years and several other languages including Nahuatl, Portuguese, German, Guaraní and K’iche’.

In his free time Liam enjoys video games, chess, language learning and can be found riding his unicycle.